Fighting for Flavor – World Building and Flavor Text in Games
mrbrad336
August 2, 2021
Flavor is anything that helps to keep a player immersed in a world. Without it, many of my favorite games wouldn't be where they are today. 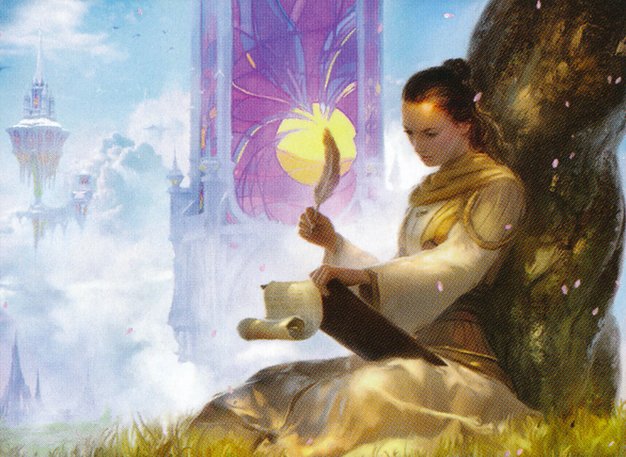 “In a healing world I write—I, who will never be healed. Let my last gift be one of memory: from a thousand lost thoughts, choose one, and remember my name.” - Tragic Poet (Magic the Gathering)

Without ‘Flavor’, I believe that Fantasy as a genre would lose a lot of its draw.  It’s no secret that I’m an escapist.  I’d much rather spend time in Dungeons & Dragons’ Forgotten Realms or the Magic the Gathering Multiverse than I would the real world, and I know I’m not alone in that.  Flavor isn’t just one thing - it could take the form of a quote on a card, a reference image in a handbook, a hand-drawn character or map, or music played to set a dramatic mood.  What makes flavor valuable is its ability to draw someone into a world, and to give us references with which to imagine those worlds.

Setting the stage is something that I struggle with.  I often find myself behind the DM’s screen when playing with my D&D friends, and while I love to draw out maps, notes, and other immersive aids to assist my players, I’ve never been great at introducing flavor through my acting and storytelling.  Something I want to get better at is practicing my voices, procuring music before DMing games, and acting out my more dramatic characters because that’s something that (though it scares me) could make for much more enjoyable sessions for all parties involved.

One of my favorite representations of flavor in fantasy is the use of records as storytelling mechanisms in video games.  I’m not sure why, but I’ve noticed a trend, especially in horror games, where players will listen to audio tracks on records or other recording devices Minecraft has music discs, most of which play songs except for one, which sounds like a person, out of breath and terrified, running in a cavern.  Bendy and the Ink Machine is another great example of recorded messages as world-building.  I haven’t played through the game myself, but from what I could tell watching playthroughs, as the player ventures deeper into the catacombs, they come across recordings of old employees who met their untimely end at the hand of the ink.  Between that and a slew of other horror games, recorded messages make for a super flavorful element to add to your world.

Another favorite flavorful element of mine isn’t limited explicitly to tabletop games.  Though I see it all the time playing D&D, I run into maps in fantasy and even sci-fi books very often.  Of course, the reader doesn’t always need the entire map of the world to discern a character’s whereabouts or for that world to feal immersive to them, but I think maps in novels inspire communities who like those novels to write more about them.  They’re a great jumping off point for fanfictions and other community-based extensions of literary works.

Maybe to you, flavor isn't any of the things I listed above.  Maybe you get that sense of immersion from something totally different.  In any case, I value it tons, and it always makes me smile when I see a little extra something to help players get into the headspace of a world.