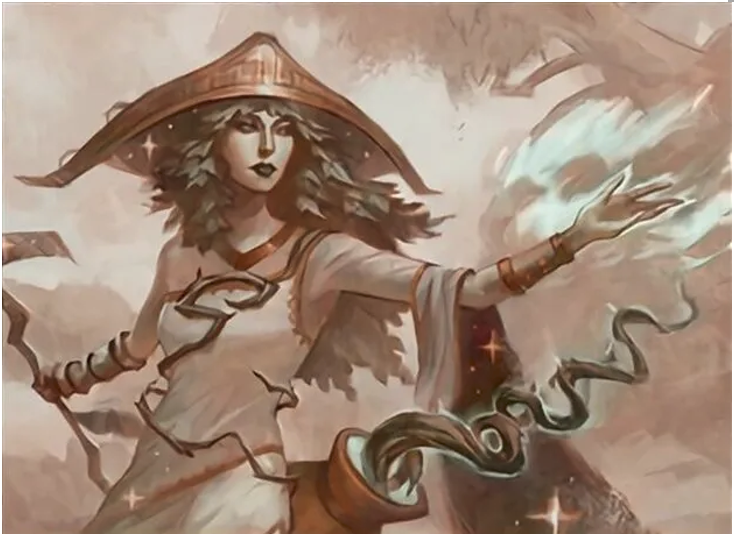 For my first blog post, I thought it would be fun to talk about my first ever Magic the Gathering Commander deck.  I actually got my inspiration for this deck from a Game Knights episode back when I was first getting into Commander with my friends.  Melissa DeTora brought this super cool Karametra enchantress deck to the table and I immediately knew what I wanted to build as my first deck.

Though I’m a little ashamed to admit it, with my initially limited knowledge of the game and format, I pretty much copied Melissa’s deck from that very episode.  Helmed by Karametra, God of Harvests, the core function of the deck was to use enchantress cards (which state that every time I play an enchantment, I may draw a card) to churn through my deck until I could find a win condition.  Most of the cards in my deck are enchantments so once I have one or two enchantresses on the field, I start to net a lot of card advantage just by playing cards.

Since ‘The Age of Karametra’, lots of new cards have come out.  I’ve made plenty of modifications to my deck and now it really only had the same package of enchantresses that Melissa’s deck had.  I had been hoping for Wizards of the Coast to release a Selesnya commander that didn’t just work well with enchantresses but happened to be an enchantress herself.  Enter Sythis, Hand of the Harvest.  Sythis was everything I had dreamed of and more.  Not only did she draw cards for you like most token enchantresses did, but she also increases your life total every time you cast an enchantment too.  All for the low, low, price of two mana!

My favorite type of Commander deck to build always has been and always will be Pillow Fort.  Coveting my life total behind an impenetrable wall of enchantments and protection spells has always been really fun to me – especially the look on my opponents’ faces that they don’t have a single card left in their deck which can remove all of my protected enchantments.  Mass protection for my enchantments lets me go wide without having to worry about individual pieces being removed. Cards that punish my opponents for removing my things tend to be my favorites, because they don't restrict my opponents from acting but instead highly discourage them from doing so.

Of course, as protected as my life total is, I can’t exactly win just by breaking my opponents’ wills.  Usually, I try to make use of my enchantments by mobilizing them into mystical creatures and stampeding over my opponents’ life totals by buffing them up and attacking with all of them at once.  This strategy is pretty risky, because while there aren’t many enchantment board wipes in the game, there are a lot of creature board wipes, so I usually wait to do this when my opponents won’t get a turn to respond, and I can take most or all of them out in one go.  One of my favorite more recent editions is Heliod, Sun-Crowned, who lets me buff my enchantments before they even become creatures.

This deck needs tons of mana to be able to function.  Without it, I won’t be able to cast all the spells I draw with my enchantresses.   Cards like Serra’s Sanctum generate massive amounts of mana, but they tend to get targeted by land-based removal so often that I’ve included Equinox as a sort of contingency plan against both targeted and mass land destruction.  Besides that, cards like Exploration & Burgeoning are most efficient at ramping because I wind up with plenty of extra lands in hand when I’m drawing so often thanks to my enchantresses.

If all else fails and I get blown out by a huge enchantment board wipe like Bane of Progress or Austere Command, I still have a chance to recover with cards that return my enchantments from the graveyard to the battlefield. While Starfield of Nyx and Sun Titan both only return cards gradually and once (or twice in the case of Sun Titan) per turn, There are a couple of spells like Resurgent Belief and Replenish which get me back on my feet immediately by returning all enchantments in my graveyard to the battlefield and reassembling my pillow fort.

I hope you guys enjoyed this deck tech, I’m sure it’ll become a series of sorts since I have small but growing collection of Commander decks.  I’ve included the link to the Scryfall page with my full deck list so be sure to check it out!  On a different note, if anyone ever wants to play Commander then don’t hesitate to reach out!  I love meeting and playing with new people through tabletop games!